“A winter’s day in a deep and dark December.”  The Simon and Garfunkel line plays in  my head as I step out of my cabin and gaze around.  I’m at William Watson Lodge, a beautiful wilderness facility for people with disabilities and, except in summer, for seniors, although we have the lowest priority.  It’s remote, quiet, and high in the foothills of Kananaskis country in Alberta.

Thin cloud shrouds the mountains, scattered snowflakes drift lazily earthward, and only a dim light filters through the trees.  Dark?  Certainly.  But not too cold, no wind, no harsh sun reflecting off the snow.  This is the kind of day I love, a perfect day to snowshoe along the forest trails.

One of many trails near the lodge.

A deep tranquility descends upon the Alberta Rockies in December.  All remnants of summer have vanished, each day is shorter than the last, and hopes for spring lie imprisoned in the tiny, dormant buds on willows and other shrubs.

Buds form in summer and are dormant until the following spring.

The pale sun, ever low in the southern sky, visits the valleys briefly, if at all.  No rustle of leaves in the wind, no hum of insects, only the faintest trickle from streams that have not quite frozen over.  The bears are (mostly) asleep in their dens, and the songbirds have migrated, leaving behind a ragtag gaggle of winter residents whose tuneless voices are only occasionally heard: raucous croaks of ravens, the raspy buzz saw of Clark’s nutcrackers, chirps and whirs from chickadees, and the sardonic commentary of grey jays.

The crunch of my snowshoes on the trail disturbs the silence.  Here in the subalpine forest snow dresses the stately conifers in white, their branches drooping under the heavy load, bending almost to the vertical, but seldom breaking.  Small, younger trees become fanciful snowmen.  Under the grey sky this is a black and white landscape, even when photographed in colour. 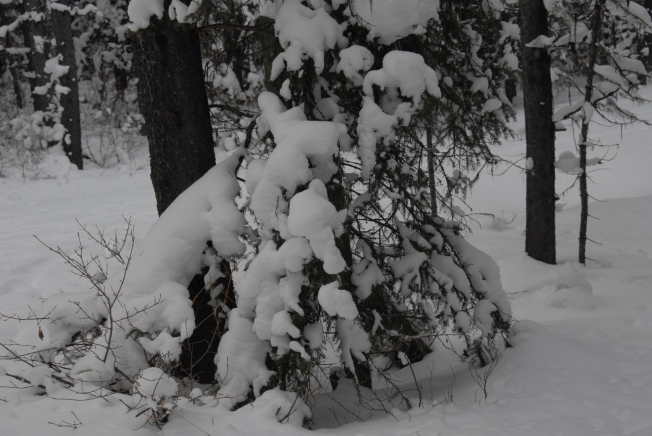 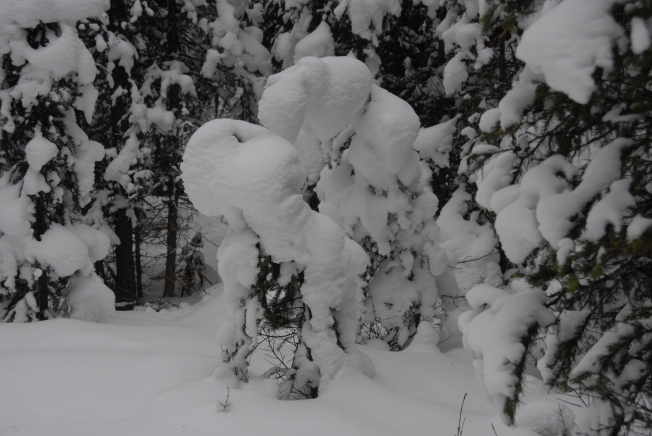 I’ve come in search of old friends, or rather, evidence of old friends.  Myriad tracks in the snow reveal the lives of the forest dwellers.  Many are nocturnal while most of the others prefer to remain unseen, so if I meet anything at all, it’s likely to be a cheeky red squirrel or a moose (the first safely up a tree, the second too big to care).

Snowshoe hares have been everywhere, capering beside the trail, on the trail, in the bush, in clearings.  I think of hares as party animals.  In Edmonton at night I see them in school yards, eight or ten sitting in a group holding a confab.  Here there are reckless crisscrossed tracks and aimless to-ing and fro-ing, showing no concern for the lynx lying in wait.  Given the abundance of hare tracks I’m sure that there is at least one lynx in the area, as the populations of both rise and fall in unison. 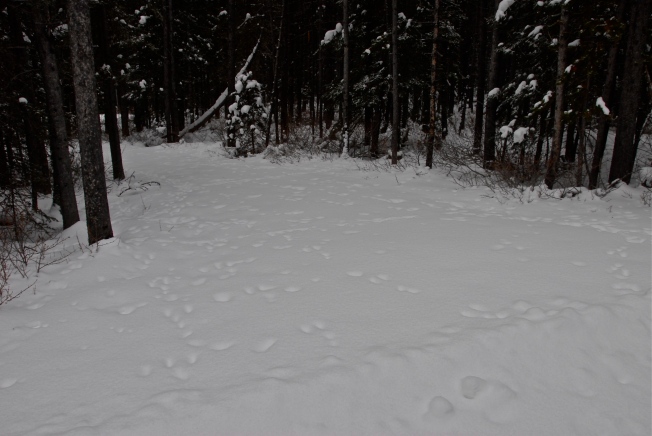 The snowshoe hares had quite a party last night. 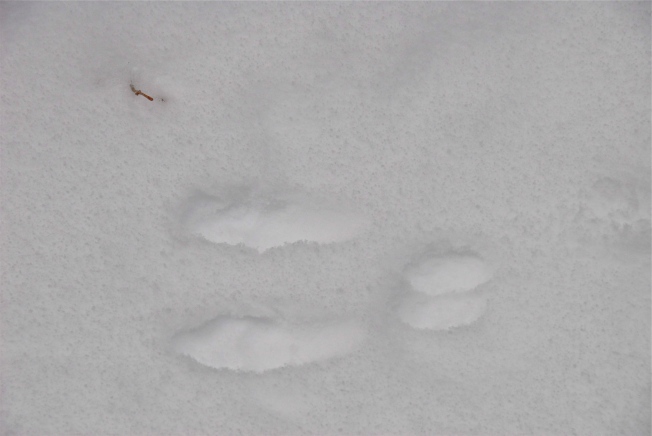 The snow is a veritable gazette for all to read.  Continuing on I come upon traces of martens.  These feisty members of the weasel family will boldly invade cabins or steal from careless campers.  I’ve seen one engage in a tug of war with a man over a loaf of bread, and once I awoke in my tent to find a marten not two inches from my nose, staring at me fearlessly.  Too small to prey on adult hares, martens search for small rodents under the snow, sometimes catch birds and squirrels, and will eat just about any source of protein, including carrion.  Their tracks are less random than than those of the hares, but they do a lot of wandering in their hunting.

Marten walking. Tracks are individual and close together.

A red squirrel scampers across the trail and runs up a tree.  It perches on a low branch as I approach, eying me suspiciously, then retreats to a higher spot, too dark for my camera, where it nibbles placidly on a cone.  In summer it would undoubtedly chatter angrily at any hiker, but winter is a season of silence.  Squirrel tracks almost always run in a straight line between trees.

Squirrel tracks lead to a tree, then away from it. On the right, marten running. Tracks paired and farther apart.

A turn-off leads to a marsh.  In summer there is a paved trail, but I see that no one has yet been there this winter.  Snowshoes need no help, so I forge a path.  Immediately I see deer tracks.  Deer have tiny feet and they drag them through the snow as they walk, creating a narrow trench punctuated by holes.

Access to the marsh is blocked by a huge fallen tree,so I follow a deer track into the thick brush, stumbling over deadfall.  An oval of compacted snow and crushed willow branches shows where the deer has slept. 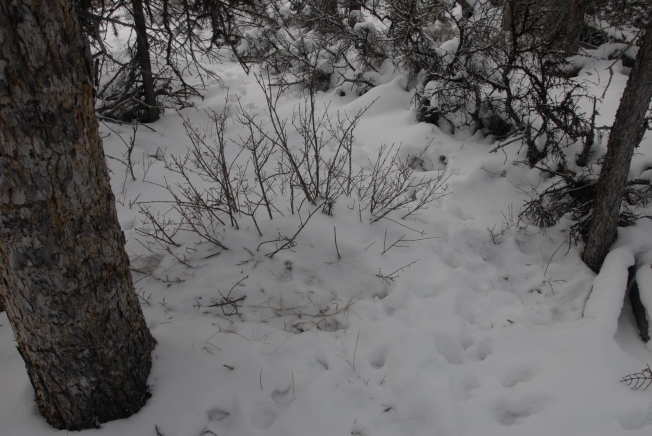 A deer has slept here.

Eventually I emerge on the edge of the marsh where I hope to see some sign of moose, but there are only more deer trails. 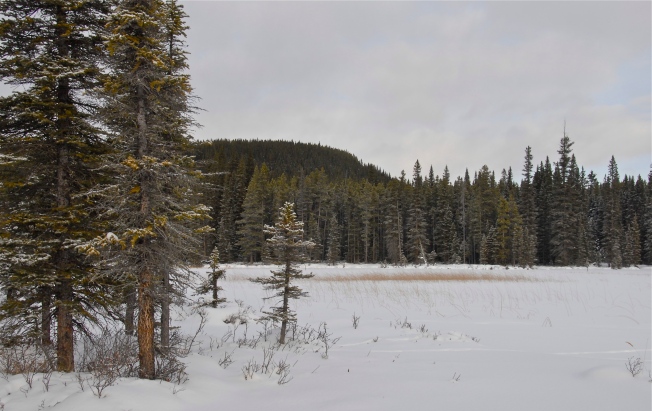 Sedges provide a little colour in the marsh. A deer trail crosses in the foreground.

Back on the main trail I’m looking now for lynx.  Even with all the hares, there’s not likely to be more than one or two of these elusive cats in the area, so I’m not surprised that it takes more than an hour to find what I’m seeking.  With paws the size of a cougar’s and weighing next to nothing, lynx don’t sink into the snow.  Their round prints always show purpose and direction. 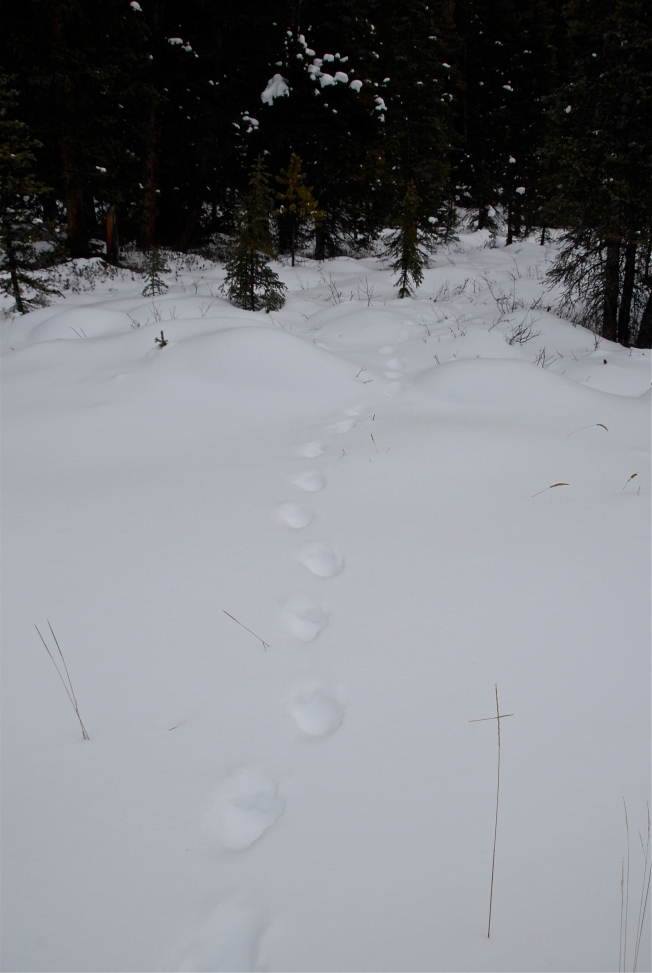 Unlike most of the other animals, lynx never seem to leap or plunge, no matter how soft or deep the snow, so their tracks always show the same short stride.  Lynx tracks can be confused with the leaping prints of martens unless they are very fresh.  The marten prints are more elongated, usually farther apart, and straight in front of each other. Close inspection will reveal two paw prints bunched in each track.  Lynx tracks are rounder, closer together, and slightly offset from a straight line.

Marten running. Sometimes the paired feet fall in the same track, leaving an imprint similar to that of a lynx.

I leave the cover of the forest and head up the cut line of some power poles.  Moose like open spaces, and I’m not disappointed.  At least one has foraged far and wide along the line, its massive hooves leaving tracks almost as big as my snowshoes.  And there, off to the side, is the moose!  It turns it head toward me, then resumes browsing. I fumble with the camera, taking shots at the wrong exposure.  Eventually I get the right ISO and capture the unconcerned animal just before it disappears into the trees.

My search for tracks is almost over.  This is not a prime cougar area, elk retreat to the valleys in winter, and bighorn sheep prefer open meadows and roads.  I’ve passed a number of tiny tracks left by little rodents (mice, voles, shrews, etc.).  They live under the snow, venturing our in warmer weather to dash frantically from one hidey-hole to the next.  In a couple of places I see prints that could be weasel, but they are too old to identify. 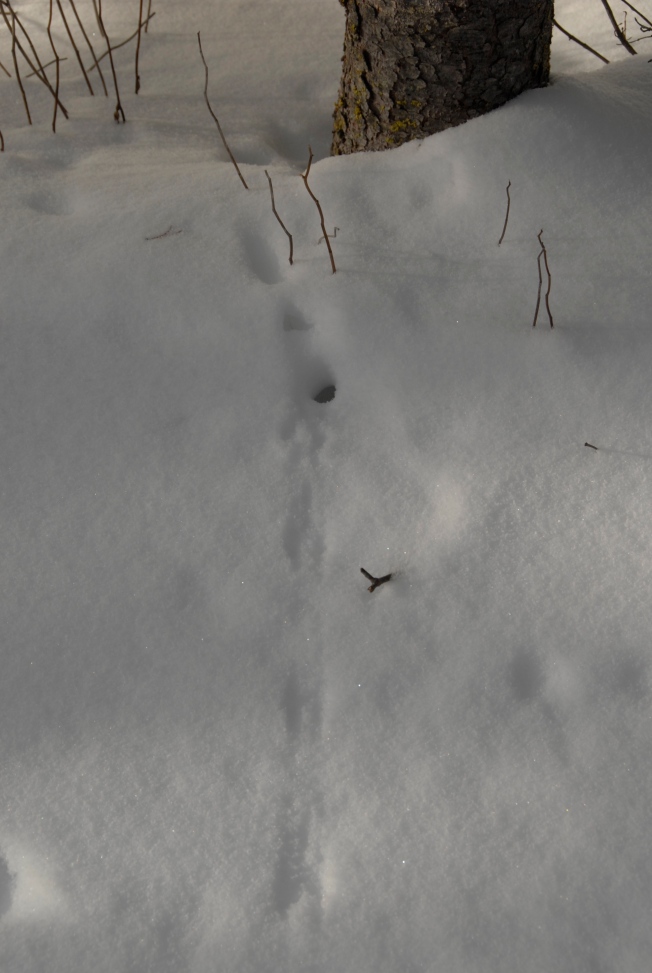 A small rodent dashes to its hidey-hole.

The network of trails leads me down to Lower Kananaskis Lake.  Here I have a clear view of the mountains, their wildly tilted and folded strata limned in snow.

The lake and the mountains

The tilted and folded strata of the Front Ranges of the Canadian Rockies.

In past years I’ve heard coyotes down here at night, but I find no sign of them today.  A snowshoe trail runs through a marsh beside the lake and I follow it.  Wind in this open area has mostly covered the tracks, but I do find some wing marks in the snow.  Since no foot prints accompany the wings, I assume that an owl has swooped down on some prey, and indeed, there is a small, messy depression where a mouse probably met its doom. 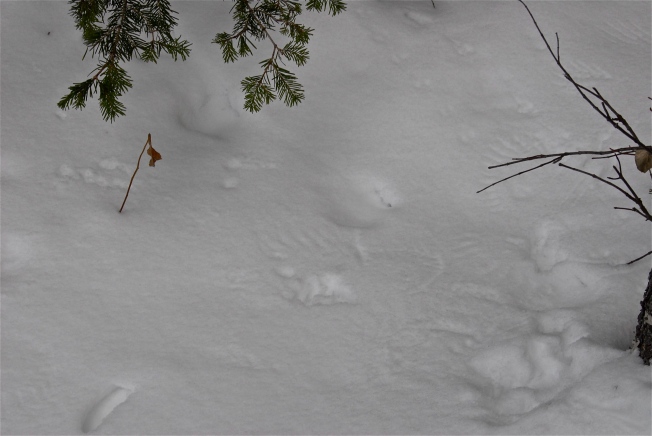 Wing marks of an owl, tracks of a small rodent. Did the owl catch its prey?

Finally, as the trail climbs up the hillside above the lake I find my weasel tracks, small prints leading to holes in the snow.  I peer down one but do not see the owner.

Weasel tracks lead to a hole in upper right of photo. I looked but nobody was home.

In a final loop the trail brings me back to my cabin, to warmth and food and the satisfaction of a day well spent in solitude, but not alone.

The door to my cabin.