February on the Great Divide, temperature in the -20s C

Beautiful or bleak? Does it make you want to hunker down by a warm fire or put on your skis and go?

Winter in the city can be brutal. It was -30 in Edmonton this morning and barely struggled to -26 this afternoon. Enough wind to freeze your face if it was exposed. At least we’re not shovelling snow or sliding on ice, and our power hasn’t gone out. But wherever you live, Canada has produced a harsh winter, and we haven’t even reached January yet.

I love winter, even in the city. But its real beauty is in the wilderness. Here are some of my favourite memories, some recent, some decades old.

Can there be a more iconic form of transportation than a sled and a team of dogs eagerly pulling you across the land?

Dogsledding in the Tombstones, Yukon

Few animals are more powerful in their beauty than the polar bear. Will we still have them when ice no longer forms in the North?

Winter is defined by climate, not the calendar. The photo below was taken in May, but we had temperatures in the -30s. Canada’s highest peak never disappoints in its scenery.

Nor does Baffin Island disappoint. I was there twice. First in 1979 with the Alpine Club of Canada. We had enough light to ski 24 hours a day, and sometimes we stayed out that long.

The second trip was a private expedition with my husband and a friend to Auyuittuq National Park. The granite walls and massive glaciers form a landscape worthy of the Norse gods for whom many of the mountains are named. 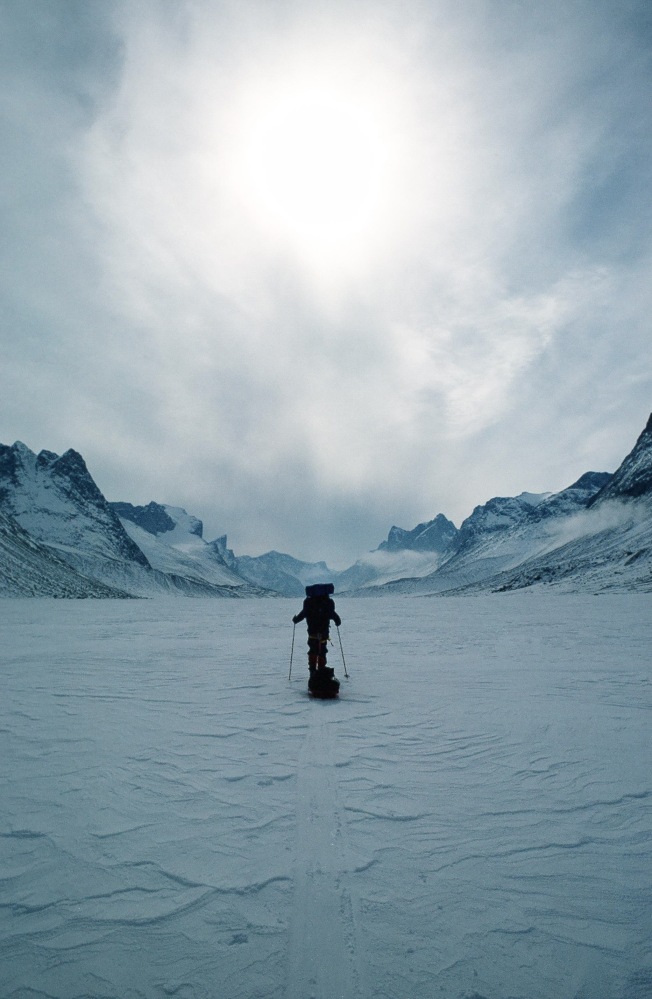 The land that time forgot.

Of course, it’s not all fun and games. We had the “help” of a snow machine to get to our first camp in Auyuittuq.

Who thought that this was a good idea?

Of course, I spend most of the winter in the city, and what I have learned in the wilderness keeps me from hibernating. I’m happy at -40, but when I’m out walking, I understand why so many people hate the season. People who can afford serviceable clothing either don’t buy it, don’t wear it, or don’t use it correctly. Instead of spending an extra five minutes at home to protect themselves, they shiver for 15 to 30 minutes waiting for a bus or walking to the grocery.

The number one error? Not covering the head, neck and face. When I wrote my book on snow camping, I said that we lose 40% of our body heat from the head. That was common wisdom at the time (1993).

Now I saw an experiment a few years ago in which people were stripped naked, placed in a cold room or in cold water, and heat loss from various parts of the body was measured. Turns out, they didn’t lose more heat from the head than from any other place on the body.

I’m not sure what the scientists were trying to prove. When is the last time you saw someone wandering naked down the street in the middle of winter?  (I hope they were treated for hypothermia and frostbite before seeing a psychiatrist.) If you have clothing on all of you except for your head, where do you think you are going to lose heat? And you’ll lose a lot.

So don’t become a cave rat. Bundle up, put a smile on your face, and go for a walk. You’ll feel better and you’ll be able to pity the poor souls who haven’t got the message yet.

For me in winter, there’s really is no such thing as bad weather–only a bad choice of clothing. Now if someone could just tell me how to dress for “hot and humid.” 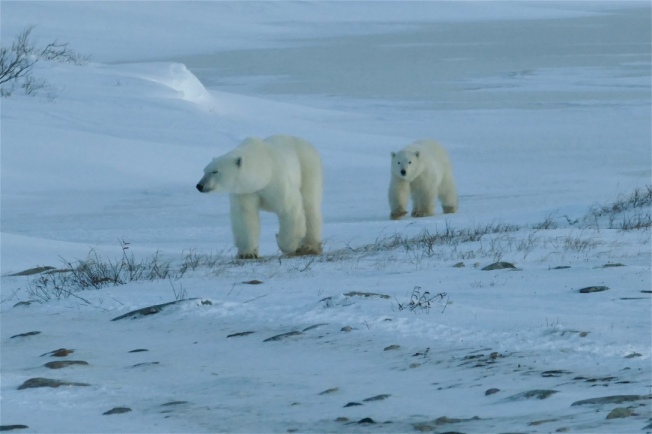 Travelling to Churchill, Manitoba to see the polar bears is hardly a unique undertaking; thousands of people have made the trip and taken stunning photographs. But it was a uniquely personal experience for me. Having spent much of my life hiking and climbing in the Canadian Rockies, I treasure every encounter I have had with the grizzly and black bears of that wilderness. The black bears are doing well, but the grizzlies are in trouble, although they are still abundant enough to be seen regularly and still have a chance for survival. Unfortunately, the polar bears of Churchill are probably doomed by the ever-increasing loss of ice in Hudson Bay, ice that they need in order to catch the seals that are their main source of food.

Perhaps I should admit to “ambulance tourism,” a sort of see-the-animal-before-it’s-gone-forever mindset. I’ve done a fair amount of that: cheetahs, rhinos, wild dogs and elephants in Africa; grey whales in Mexico; Argali sheep and Przewalski’s horses in Mongolia. But no animal arouses more emotion in me than bears, and no bear is more magnificent than the polar bear. This is the story of my journey.

Because I believe that Natural Habitat, in partnership with the World Wildlife Fund, does an excellent job of minimizing the ecological impact of its tours while maximizing the benefit to wildlife, I signed up with them for a photo tour based out of Churchill, Manitoba.  The tour included three full days on the tundra in a Polar Rover plus short bus tours the afternoon of our arrival and the morning of our departure. When you want to see wildlife, you need as much time and opportunity as possible because the wildlife cares nothing for your desires or schedule. Somehow we hit the jackpot, with bear sightings on all five days.

The shore of Hudson Bay around Churchill is pretty desolate, looking more like the Arctic than its southerly location would suggest. This inukshuk greeted us. Note that the water in the bay has not yet frozen over, so the bears cannot leave for their winter hunt and are still gathered around Churchill. 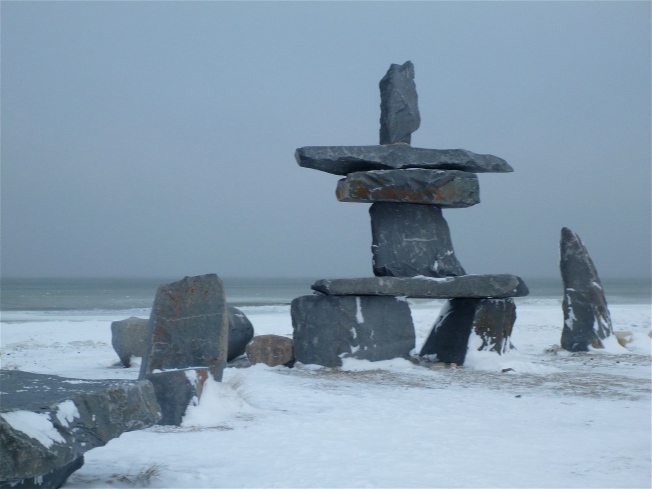 We had barely settled into our seats on the bus taking us from the airport to our hotel when the driver pointed to our first bear. We had to look hard because to our inexperienced eyes, the bear was almost indistinguishable from the background. It wasn’t long, however, before we were able to pick out a white bear in a white landscape with ease.

Our first bear, dimly seen through the mist and snow.

During lunch, we learned that some bears were to be airlifted from the bear jail that afternoon, and we almost ran over our photographer leader as we leapt from the table and headed for the bus.  Now I’m just a duffer when it comes to photography, but we had some pros in our little group, and they were an avid bunch. They came prepared with multiple cameras, gigantic lenses and, of course, warm clothing.

Setting up to see the bears get flown out. 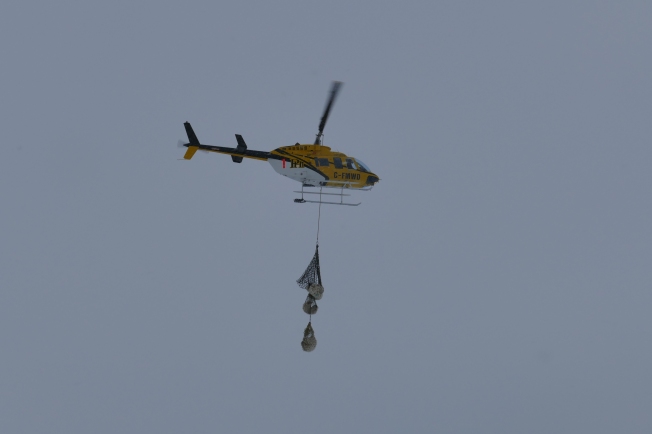 Hopefully these bears will find ice and not return to Churchill.

Polar bears by themselves are cute, cuddly and wonderful subjects for the camera (if you have a long lens and the protection of a sturdy vehicle). They almost seem to enjoy posing.

What a handsome fellow I am! 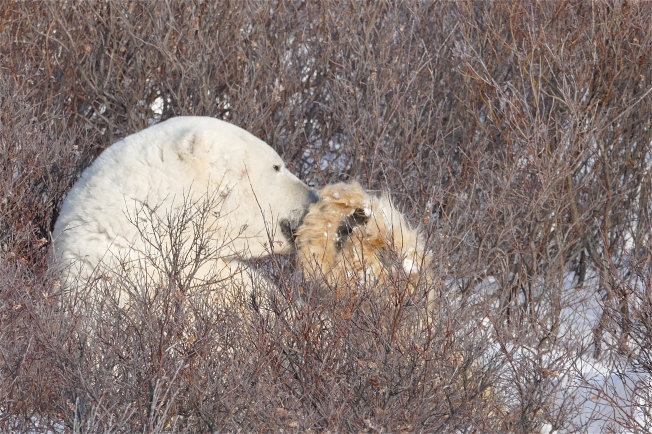 I think my foot is pretty impressive. 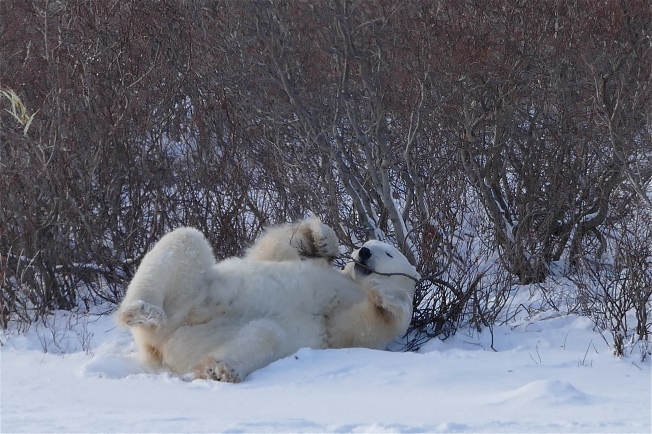 I would rather be hunting seals.

They are also very curious, coming right up to the vehicles.

A mother and cub inspect a Polar Rover.

And you may be just inches from two beady eyes and a snout.

There’s a boot one inch from my nose and paws.

Churchill is a zoo where the people are in cages. It’s not like Africa, where the safari vehicles often are open, and the protection they offer comes solely from the animals’ inability to recognize that a good meal is only a few feet away. I’m pretty certain that if the polar bears could get onto the open platforms of the Polar Rovers, they would consider the people there a decent substitute for seals.

As we drove around the tundra and shore of the bay, we found haunting scenes of wild beauty. 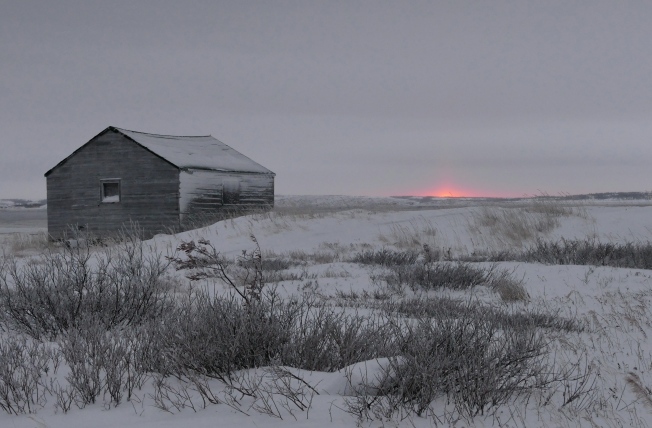 A frigid hour to enjoy the aurora borealis. I had no tripod and didn’t know what I was doing, but help from our intrepid leader allowed me to get one decent shot.

On a clear night you can see….

And on one day, sunshine.

Note how ice is forming in the bay.

Without the heated Polar Rover, we would have been hard pressed to take many photographs. No one could stand out on the rear platform for more than a few minutes. Most of the time, we shot through the open windows of the rover.

Dressed for the conditions.

If one bear alone is cute, two together are a star act. When two males meet, they often engage in play fighting that only occasionally becomes nasty. 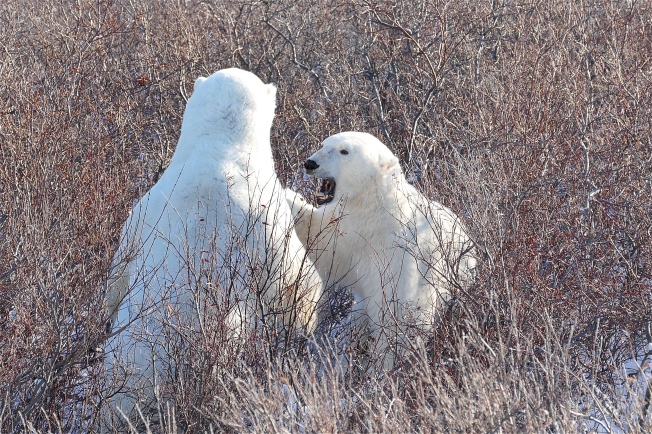 Do we need a referee?

But it is mothers and cubs that provide the best entertainment.

Mother with older cub coming to inspect our vehicle.

Mother with young cub and a goal in mind. 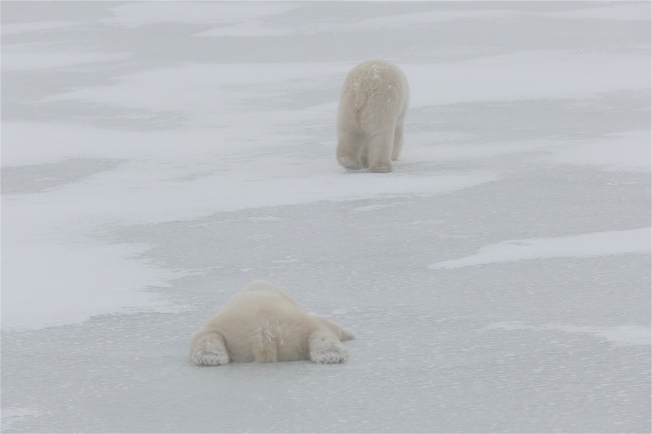 Mother and cub heading for Churchill.

The end of our visit coincided with the freeze-up of Hudson Bay, and we were treated to the sight of bear butts heading out across the ice, not to return until next summer. I have no idea how many bears we saw, as we lost count on our first full day on the tundra. Tours that came before us probably saw fewer, while the two or three that came later would have seen only stragglers. It was no stroke of genius on my part to choose these particular dates; sometimes you’re lucky with wildlife, sometimes not.

As a bear experience, this trip left me with mixed feelings. Yes, I took photographs that I could never get in the Canadian Rockies, where I go on foot and usually solo. I do my best to avoid close encounters, but in fifty years of wilderness hiking, I’ve had a few. When I was 60 feet from a full-grown male grizzly that was standing on its hind legs trying to figure out what I was, taking a photo was the last thing on my mind. And yet, that encounter, which ended with the bear leaving the scene, has never been matched for the awe and shear joy that it inspired (after I stopped shaking, of course).

Such an experience is just not possible with polar bears, any more than it is with lions, leopards and the like. The closest I have come to meeting a polar bear in the wild was a night on Baffin Island, when I was in a tent with two other women, far from the security of our base camp, and with no gun to protect us. No bear came, but even though it’s a night I would rather forget, it remains almost as vivid in my memory as the grizzly encounter.

The Churchill tour goes alongside the tour of Botswana (also with Natural Habitat) that I took earlier in the year. It was a wonderful trip that I will revisit and cherish through my photos, but there is a profound difference between observing nature and being a part of it. If advancing age makes organized tours a reasonable and enjoyable alternative to prancing around the mountains with a heavy pack on my back, it will not deter me from seeking experiences that can be gained in no other way. At least, not so long as I have two good feet.

Copyright Notice: All photographs in this blog are the property of Jo Ann Creore. All rights reserved.