This trip is not for the weak of stomach or liver.  When we were not on the river we were usually eating or drinking or eating AND drinking.  We stayed in quintas (historic vineyard estates), dined on lovingly prepared traditional dishes, learned how port is made, and sampled as many wines as our generous hosts could put before us.  Small wonder that this tour is affectionately dubbed “Float and Bloat”.

I arrived in Oporto two days before the trip was to start, partly to recover from jet lag but mainly to have a chance to visit this stately old city at the mouth of the Douro River. Armed with a map and walking shoes, I wandered freely, pursuing whatever view seemed most interesting.  The central area of the city is very small and is easily covered on foot in a day and a half.  Graceful buildings and green parks follow the narrow streets that spill down the precipitous slopes leading to the historic riverfront district.  I’m not one for tour buses and the like, but ten Euros were well spent on a boat tour of six bridges across the Douro.  One night I also enjoyed my first taste of fine Portuguese cuisine in a restaurant recommended by my hotel (mussel soup with saffron and puff pastry – exquisite!). 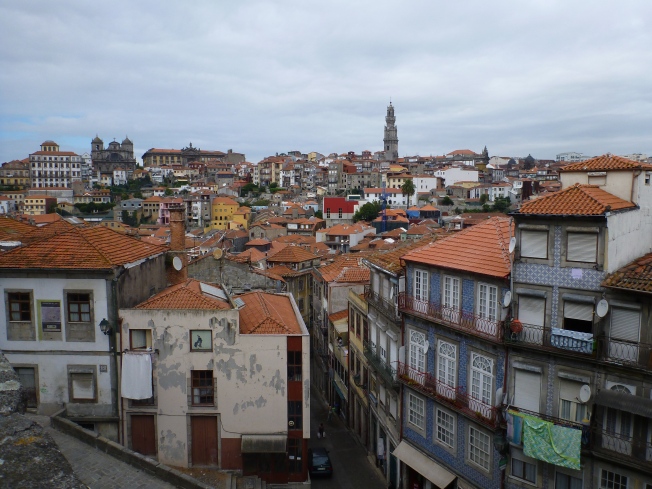 View of Oporto from the Se Cathedral

Two of the graceful bridges over the Douro 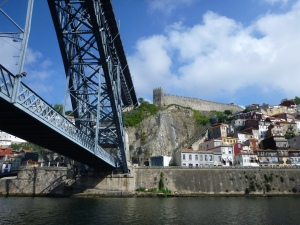 View of the steep relief of the city

The beautiful and historic riverfront district of Oporto

Our group met on the afternoon of September 11 and promptly got down to the business of the trip: wine.  Graham’s port winery is one of many across the river, and we were treated to a tour of their facilities.  The port is actually made at vineyards up river, held there for six months, then trucked to Grahams to be mixed, evaluated, aged and bottled.

Barrels for aging at Graham’s winery

Having always drunk ruby port, I thought that this was basically what port was.  What a surprise to learn that ruby is the lowest quality they make.  There are tawny ports that are aged for various numbers of years, and then vintage ports that come from an especially good harvest.  Some of the latter are over 100 years old. 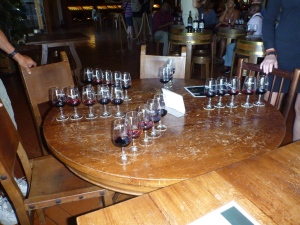 After tasting five different ports and realizing the variance in quality, I was quite ready to spend whatever it took to get one of the vintage bottles, planning to serve it on special occasions to special friends.  Alas!  We were told that the vintage ports must be consumed within a day of opening.  There is, I decided, a limit to friendship.

Already stoked with five glasses of port at Graham’s and more at a group meeting in our hotel, we somehow navigated to a waterfront restaurant for more wine and a dinner which I remember was excellent; unfortunately the specifics have been lost in the sea of gastronomic indulgence that followed over the next few days.

Yes, this was a kayaking trip, and I will actually get to the kayaking in the next post.

One thought on “SUN, WINE AND WATER: KAYAKING PORTUGAL’S DOURO RIVER Part One”